Using a touchscreen or contact-sensitive controls requires them to be touched by something that they can detect. Depending on the technology employed, they may or may not be able to detect touches by objects such as a pen, a pointing stick or a prosthetic device. They should be able to react to whatever a user might need to touch it with.

Touchscreens can be triggered either by insertion or withdrawal of the fingertip. With the latter system, it is technically possible for the user to pass their fingertip over the screen and get speech output describing the active area being touched at the time. Then the system is only triggered by withdrawing the fingertip from over an active area.

It is possible to increase the size of the characters on the screen for individual customers who require this facility. This can be done by selecting this option from a menu or, preferably, by storing this information on the customer's card. With touchscreen systems, it could be arranged that holding one's finger in the bottom right corner for at least 2 seconds indicates that one would like larger characters on the screen. Large characters will be difficult to implement on small screens.

To help elderly people and those with hand tremors, key fields should be as large as possible and separated by a dead area. There should be high contrast between touch areas, text and background colour.

For blind users, it is possible to arrange that holding one's finger in a specified corner of the screen for at least 2 seconds or tapping twice in the corner initiates speech output. Another method would be to store this requirement on the user's card. 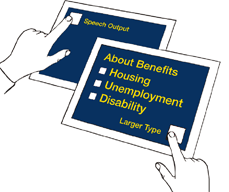 To use a touchscreen from a user-propelled wheelchair, the height of the active areas should be between 800 and 1,200mm for most users. Also, the screen should be perpendicular to the line of sight. If the terminal is also to be used comfortably by standing users, this may involve using two screens or a variable height screen.

A person who has lost a limb, such as an arm or hand, will use a prosthetic device such as an artificial hand. They may well have sufficient control to be able to accurately point at and press buttons or keys. However, the prosthesis may be made of metal, plastic or some other material with dialectric properties that are different from those of a human finger. The terminal will therefore have to be able to detect this other material in order to react to the user's inputs.

There should be clear indication that this is a touchscreen; this should be done using an appropriate icon accompanied by text.

The touchscreen should be shielded from sunlight. Avoid using screens that react to capacitance changes. If this is the case, it may help if the user interface can be adapted by the user, or automatically for the user, to fit their individual capabilities. For example, if the terminal uses a touchscreen, there is scope for offering alternative layouts of controls. Users with limited dexterity could choose a layout using large, widely spaced controls spread across two screens, whilst users with good dexterity could choose a more detailed layout in which everything is included on a single screen. The choice could be made by the user selecting from a number of displayed options. Alternatively, information required for the terminal to switch automatically could be encoded on a user's smart card at their request.Graphical symbols (such as icons) should be accompanied by text.An inactive space of a width of at least 5mm should be provided around each target, which should be at least 1cm across. The screen should be angled towards the horizontal to provide arm/wrist support, but this may create visual difficulties with parallax and increased reflections.A keyboard alternative should be offered wherever possible.

How you could check for this

Run a testing programme with representatives from the actual target user groups in realistic situations of use.During testing, the following key checks should be made: